Why are Mako’s Special?

Mako Sharks are the smaller cousin of the Great White, reading on will give you a few reasons about what makes them special.

Why are they called Mako Shark?

The name comes from the Mãori language, literally meaning “shark”. In Samoan languages “Mago” and Ma’o in Tahitian. In Australia they are called Sharp Nose Mackerel Sharks and in other parts of the world Bonitos.

These are the smartest sharks in the species, their brain-to-body ratio being the largest of the sharks. This brain capacity allows the shark to hunt and find their way using critical reasoning, sight, sound and smell, unlike other sharks that require electro-receptors to detect prey and navigate. In fact, these sharks are so smart they can assess the threat factor in humans which allows non-threatening researchers to hand feed or even touch them. Making makos the smartest shark on earth.

How old do they get?

Makos live to between 28 years old and 35 years old in the wild. They are oviviparous (meaning their eggs are in the belly) incubating for around 18 months. 4 to 18 pups are born live at around 28 inches long at birth. Males reach sexual maturity at 8 years old while their larger female counter parts only get there at 18. Adults can grow as long as 3 – 4 meters in length.

Of course, being a predator doesn’t mean they can’t be predated. Some of their threats are groups of dolphins (believe it or not), swordfish (which is funny since they eat swordfish themselves) and of course larger sharks.

Why are they so fast?

Mako sharks are the fastest shark in the ocean. They can reach speeds of up to 96km’s/h allowing them to travel as far as 58km’s per day. Scientists believe that this is because of their skin. Their scales (also known as “denticles” as they resemble teeth) are flexible thus affecting the pressure drag…you can read more about that here: Mako Speed Research 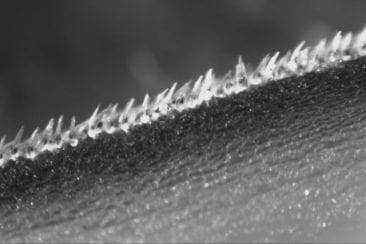 Where do they live?

While they prefer warm and temperate waters Makos are found world wide. In South Africa they are predominantly found in Cape Town and on Sardine Run.

How many teeth do they have?

Are they an endangered species?

Much the same as the rest of sharks, Mako’s are under threat, they have been listed on the endangered species list. The primary reason being HUMANS! Over-fishing has depleted their numbers wither by directly fishing for them or as by-catch. They are victims of the finning industry where they are caught and finned alive, and then left to drop to the bottom of the ocean and drown.